RUSH: Now, let me give you another example of totally fake, lying news. I hold here in my formerly nicotine-stained fingers the media column by the latest media columnistette at the Washington Post.

Her name is Margaret Sullivan, I believe. Let's see. (sigh) Margaret Sullivan. Try this headline. I realize not many of you may have seen this because you don't read, on my advice, the Washington Post. "The Data Is in: Fox News May Have Kept Millions From Taking The Coronavirus Threat Seriously." This story is all about how conservative media is responsible for coronavirus case increases and deaths, because conservative media has told its audience that there's nothing to see here.

That the coronavirus is not serious, that it's this massive conspiracy, that it's overblown; you don't need to worry about it. This is in the Washington Post. This is one of the most egregious examples of fake news that you'll find. "It's another one of those Trump Era realities best described as unsurprising but nevertheless shocking. Three serious research efforts have put numerical weight -- yes, data-driven evidence -- behind what many suspected all along:

"Americans who relied on Fox News, or similar right-wing sources, were duped as the coronavirus began its deadly spread. The studies 'paint a picture of a media ecosystem that amplifies misinformation, entertains conspiracy theories and discourages audiences from taking concrete steps to protect themselves...'" Now, this, again, is classic.

If there's anybody literally guilty of amplifying misinformation, it is the Washington Post and the New York Times and CNN. They have lied. They have amplified lies. They have made things up about the 2016 election for four years and counting. They won Pulitzer Prizes on the basis of lies. I mean, there wasn't one thing they wrote... Folks, do you realize this?

In three years or four, there isn't one thing they wrote that was true about the 2016 election being meddled with, stolen by Trump, Trump working with China, Trump working with Russia, Trump stealing it from Hillary. Not a word of any of that has been true. It is all fake news or lies or misinformation. And you talk about a conspiracy theory?

What better conspiracy theory could you adopt than Donald Trump secretly working with Vladimir Putin to outsmart the smartest and brightest and bestest Democrats the country has to offer? Hillary Clinton, John Podesta, John Brennan, James Clapper, James Comey, Nancy Pelosi, this rube Trump outsmarted all of them. He successfully stole an election that literally could not be stolen, and he did it as a Russian agent.

And these people have the audacity write now -- w-r-i-t-e, to report now -- that Fox News (and they mention my name here in a minute) as being responsible for you not taking coronavirus seriously. (sniveling) "Those who relied on mainstream sources -- the network evening news or national newspapers -- they got an accurate assessment of the pandemic's risks.

"Those were the news consumers who were more likely to respond accordingly, protecting themselves and others against the disease that has now killed more than 123,000... Those who relied on Fox or, say, radio personality Rush Limbaugh, came to believe that vitamin C was a possible remedy..."

Now, folks, I have never mentioned vitamin C as a remedy to any damn thing in American health ever on this program because I don't believe it. I don't believe it. You can swallow vitamin C until you can't swallow anymore, and it's not gonna keep you from getting a cold. That's what I think. I never talk about it. I have yet to mention vitamin C was it relates to anything with the coronavirus.

I have never downplayed the seriousness of it.

I have never downplayed the severity of it. 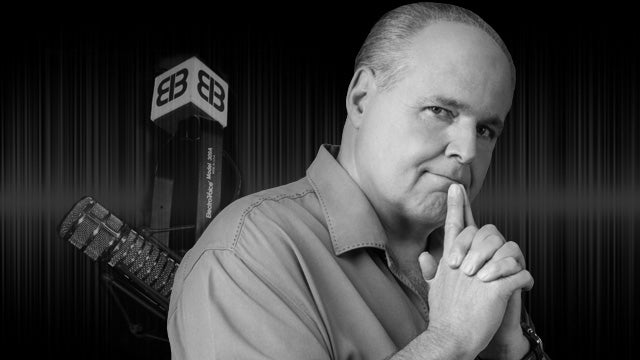 I have lamented that I didn't think a shutdown -- nationwide shutdown or lockdown -- was necessary because the way it was being done, there was no way it was going to stop the spread of the virus anyway. All it was gonna do was delay it. But if they're willing to publish such a blatant lie -- and, by the way, with Nexis and Lexis or Google, they could have easily researched this.

Margaret Sullivan, her fact-checkers could have found out I have never mentioned vitamin C in relation to coronavirus or anything else. I don't take vitamins! Well, I take that back. I'm being forced to take 'em now, but in my whole life I believe that I get all the vitamins I need by living. And even now, I'll make sure I'm outside 20 minutes a day just to get some vitamin D.

But I have to lather up out there to do that. I'm very susceptible to the sun, but I make sure I get 20 minutes of vitamin D 'cause you can't go get a pill for it. In case you didn't know, during the Spanish flu 1917-'88 that's what people were advised, "Go outside, get fresh air, get some sun. That's the best thing you can do." There weren't some therapies for the Spanish flu back then. People just lived through it.

You know, we didn't even shut the country down. Woodrow Wilson never even made a single statement about the Spanish flu 'cause it was World War I time. That was his focus. At any rate, if they are willing to construct a lie as blatant as this, then as far as I'm concerned, everything else in this story is... You have here the entire... CNN did a story on this; now you got the Washington Post.

The entire Drive-By Media is doing long-form stories on how Fox News and conservative media are the reason the virus is spreading because our audiences are a bunch of mind-numbed robot idiots who don't know what to do unless we tell them. "'That's the real evil of this type of programming,' Arthur West of the Washington League for Increased Transparency and Ethics . 'We believe it delayed and interfered with a prompt and adequate response..."